Srimathi Dharshana is a Ceramic Engineer, lives in Chennai, India. A Peripatetic and Social Activist. She loves to explore all domains of knowledge and teach students.

Pressing is accomplished by placing the powder* into a die and applying pressure to achieve compaction.

*premixed with suitable binder and lubricant and pre-consolidated so that it is free-flowing. Free flowing can be achieved by granulation or spray drying.

Organic binder required for binding is low usually 0.5 to 5% wt is used. They decompose during high – temperature densification step and gases evolve. Sometimes they leave a carbon residue. E.g.PVA, cellulose, rubbers, waxes. Glycerol is a plasticizer for PVA.

An inorganic binder such as kaolin don’t burn off instead they become a part of ceramic.

Binder selection depends on the type of pressing that is to be done.

LUBRICANTS: They reduce the friction between the particles, between granules and between the powder compact and the walls of the die.

COMPACTION AIDS: It increases the green density and reduces the shrinkage during densification.xc

Definition: Compaction of powder into a rigid die by applying pressure along a single axial direction using a piston, punch or plunger.

Uniaxial presses are hydraulic or mechanical.

1.Improper density or size.(Due to off-specification of powder batches, easy to resolve)

BIAXIAL PRESSING: Pressure is applied from the top as well as the bottom.

The limitations of uniaxial pressing such as non-uniform density overcome in isostatic pressing. It is also called as HYDROSTATIC PRESSING.

Compaction of powder is due to the pressure from all the directions.

This is of two types i. Wet bag and ii. Dry bag isostatic pressing. 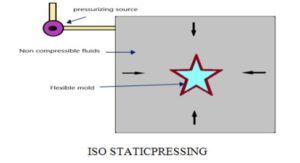 To remove the fluid from the slip the mold should have some controlled porosity. Also, the mould should be of low cost. Plaster Of Paris (POP) is a traditional mould making the material. Some new molds are also available, e.g. porous plastic mold for pressure casting.

Plaster molds are prepared by mixing POP with water and the mix is poured into a pattern mold and allowed to set. This produces a smooth surface mold, duplicating the contours of the pattern of complex shape.

Hemihydrate crystals precipitate into needle-shaped crystals that interwine to produce plaster mold. This reaction is satisfied with 18% of water additional water is essential for a fluid mix and to form a porous mold.

1) Dry all body materials and weigh them accurately.

2) Fill the right amount of water in the blunger. Gradually add soda ash dissolved in hot water, then add half of the body. After some blunging add the remaining body and the sodium silicate.

4) Screen it through 60 mesh. Check fluidity with the funnel test and density by weighing 1 lifer of slip. Cast a few items to be sure the slip is working correctly.

1) Before casting examine the moulds for clay or dust on the inside.

2 )Clean dirt from the moulds with an air hose or a soft dry brush. Never use water it will damage the mould.

3 )Arrange the moulds in the order of cas-ting: heavy moulds first, then medium size, then small size.

4 )Join the moulds tightly together with rubber bands or thread.

5 )Stir the slip just before casting and check that it does not contain air bubbles.

6) Pour the slip slowly and evenly into the mould without stopping and splashing. The slip should hit the bottom of the mould.

8 )Let the mould set until the casting has reached correct thickness.

9) A good mould can be used 2 to 4 times per day, depending on weather conditions. Before each casting, the mould must be dried in the sun or in the drying cupboard Otherwise moulds wear out fast.

10 )After correct thickness is reached, drain out the excess slip. If the slip is drained into its main container, do this through a coarse screen that will retain pieces of plaster and dry clay.

11 )Then keep the mould upsidedown until the clay is stiff enough to remove.

12 )Take the cast product out when the clay starts to pull away from the plaster mould.

Long time periods are required for casting articles. This result in large inventory of moulds, high labour, large floor space. All these adds to cost.

2). Produce a thin walled body such as tubes.

Tape casting is used to fabricate thin sheets of ceramics in large quantities and at low cost.

This technique is used in fabrication of honey comb structures for heat exchangers.

In this technique, we produce shapes from a mixture* of powders and additives that are deformable under pressure.

ARTICLES MADE: Fabrication of traditional cermics like pottery, dinnerware.

In the extrusion process, highly viscous, a plastic mix of ceramic powder with additives (with a consistency that of potters clay)  is forced through a shaped die with high force.

This is similar to squeezing frosting out for cake decoration.

There are TWO TYPES OF EXTRUDERS.

(1)the particle size distribution, (2) degree of packing, (3) thickness of compact.

(2)contamination during mixing, linings of blades, augers and extruders introduce metal particles due to wear.

ARTICLES MADE BY JIGGERING AND JOLLYING:

We have seen All types of Ceramic production process techniques in this article. If you need anything more let us know in the comment.